Carbon capture, storage and utilization is the process of collecting waste carbon dioxide (CO2) and transporting it to a storage site where it is deposited. The goal is to prevent the release of large amounts of CO2 into the atmosphere from heavy industry and use it for e.g. E-fuels.

The level of CO2 in the atmosphere is at its highest since the 19th century due to the combustion of fossil fuels.

Carbon capture and carbon storage are technologies that are regarded as useful in reducing carbon emissions and thus global warming.

At DTU, we conduct research into carbon capture, carbon storage, and how to utilize non-stored CO2 to create new chemicals and green fuels.

What is carbon capture utilization and storage?

The abbreviation for Carbon Capture Storage is CCS.

Recently, however, a ‘u’ has begun to be added, so that the abbreviation is CCUS, which stands for Carbon Capture Utilization and Storage, because it is expected that, in future, CO2 will become a valuable resource that will not only be captured and stored, but must also be utilized as part of the climate action.

Today, carbon can be captured from the smoke from industries and from CHP plants, or it can be separated from biogas plants instead of just emitting the CO2 into the air.

Take biogas for example. It consists primarily of the greenhouse gases methane and CO2. Biogas can be burned off immediately to generate heat, but it is also possible to upgrade it by separating the two gases. Methane can, for example, be utilized in natural gas supply, while CO2 must be captured instead of simply being emitted into the surroundings.

One way of capturing CO2 is to conduct it through long pipes down to a liquid, which, among other substances, consists of various additives that help absorb the CO2 in the liquid. When the CO2 has been absorbed in the liquid, it can be separated and stored underground. This is done by pumping the CO2 into the many small cavities of the underground, while the above clay layer acts as a lid.

Calculations from GEUS have shown that the underground in Denmark can probably contain up to 22 billion tonnes (GT) of CO2. This is equal to between 500 and 1000 years of the total Danish emissions at the current level. Therefore, work is being done to commence carbon storage in Denmark.

Instead of storing the CO2 from the biogas absorbed in the fluid, it can also be recovered in a purer form without sulphur and other biogas residues, which turns it into a resource (that is a product) which can be resold and utilized for other purposes such as for production of chemicals and, in the long term, also green fuels (Power to X).

At DTU, the researchers are therefore studying how CO2 can be both captured most efficiently, stored, but also utilized as a future resource. 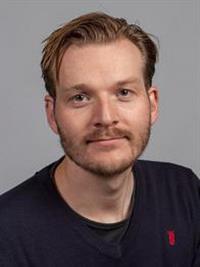